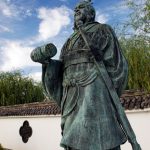 This chapter has the potential to get very dark, but it is so critical we do not underestimate the plan of the enemy. Hang in there with me as I define the problem, because the solution is not only more obvious in context, but sweeter if you know your role in this relationship. You are not the victim here, you are the light bearer in the darkness, a.k.a. the reminder of everything satan lost when he was cast from heaven. satan is jealous of you and tormented by the light you have and the glory you carry.

WHY WHERE WHAT ENEMY??

You may be unaware of this, but you are at war. My wife always says, “There is no neutral ground.” If you are not advancing, you are retreating. This is not a war for the passive. Your adversary is active and has plans in motion to distract you from your ability to produce life. Your sexuality is a big deal to the enemy because it’s a big deal to God. Our sexuality is an easy target because it is connected to one of our strongest physical urges and deep emotional needs, i.e. sex and connection. The drive for sexual pleasure was given to us as an impetus for connection to the opposite sex. A sex-drive is a highway to our unmet, sometimes unknown need for connection. We need connection and especially connection with the opposite sex because it strengthens and reinforces our hearts as we reunite what was lost in the curse. The result of this union produces fruit and multiplication not just as in children, but also in producing life in the world around us. Connection of 2 halves in intimacy to produce life is a prophetic type-and-shadow of intimacy-unto-fruitfulness. If you can be distracted here you will not produce any the lasting fruit of life which is contrary to they way you were designed. Distracting you from producing meaningful connection and life is an ancient scheme or device set in motion way before you had the any idea it existed. From asherah poles and temple prostitutes all the way to modern, prolific, hardcore-internet-pornography seen by kids at alarmingly early ages, this fight has been with us fro a long time. We need to catch up and fast. This may be new to you, but this is not a new fight. Although you are better equipped than you realize the enemy has been at this for lot longer and he is better at it than you. The enemy can’t afford for you to realize that you have the winning hand and works tirelessly to convince you that this is ‘normal’ or ‘impossible’ to quit. When you realize you have the ability to overcome him, you can begin to produce life through connections with God and others. It is by this faith we produce glory for God.  satan knows this and by his very God-undermining-nature will do whatever he can to rob you of this fruit.

I want to be clear at this moment satan has actually already lost the battle, we are the only ones who don’t believe it yet. There is enmity between the offspring of Eve and the serpent for he knows we will crush his head if we knew how powerless he is and or how powerful we are. When we enter the battle knowing we are assured of victory, the enemy is afraid and although it seems as if the struggle gets harder, it’s only his poor attempt to make you believe it’s impossible to live free. There are men all over the world winning their own private fight and experiencing true freedom from the bondage and or struggle with this ancient device/scheme of the devil.

Be forewarned we can’t blame the devil for everything, as some have done. God himself has given you a powerful sex drive that also must tamed and appropriately directed. Sex isn’t an abomination and a weakness, but sex is a strength that should be celebrated in our culture for it’s inherent relationship edifying attributes and it’s ability to extend God’s glory. We will address this later, but as you read this please know this is only one small part of the struggle.

The scripture tells us:

“…so that no advantage would be taken of us by Satan, for we are not ignorant of his schemes.” 2 Corinthians 2:11

“Put on the full armor of God, so that you will be able to stand firm against the schemes of the devil.” Ephesians 6:11

A look at some Greek

‘Schemes’ as in Ephesians 6:11 = 3180 methodeía (the root of the English term, “method”) – properly, a predictable (pre-set) method used in organized evil-doing (well-crafted trickery).

Properly we ought to think of the word ‘schemes’ as deceitful craftiness. This is confirmed in our experience with the lies he tells us, and John 8:44 Jesus says that satan is a liar and the father or origin of lies. Satan is a liar; always was and always will be! If he can convince a powerful person that they are powerless, he can hold them as vassals in a covenant of deceit. Or if he can undermine the truth in anyway, he can tear at the fabric of faith that produces seed.

Satan will also lie about who you are to God. In Revelation 12:10, John reflects the vision where he saw satan as the accuser of our brethren, accusing them before God day and night. Thank you God that we have an advocate in heaven, Jesus Christ the righteous One, hey?

Devices as in the KJV of 2 Corinthians 2:11 =  3540 nóēma (a neuter noun, derived from 3539 /noiéō, “to exert mental effort”) – properly, the mind, especially its final output (systematic understanding, TDNT). Note the -ma suffix which underlines the result of the thinking, i.e. the personal verdict that comes out of using the mind.

Properly this refers to satan’s thoughts toward you. Do not be ignorant then of his thoughts, purposes, designs for you. Or even how he directs he entire being toward us. According to John 10:10 we know that satan’s intent is to kill, steal and destroy. This is the opposite nature of Christ, who said He came to give us life and life abundantly. It’s very simple, we don’t really have to study our enemy to know him and his thoughts toward us. We can know him by knowing Christ. We know that our enemy is ‘anti-Christ’ or the perversion of (or wrong version of) Christ. Some people think that satan is Christ’s nemesis, but rather he exists only as an opposite reflection or a poor counterfeit of Christ. Everything we learn about the nature of God can be seen in Jesus Christ. We can assume then then satan’s nature is a poor/weak substitute of the real thing and and opposite spirit than the spirit of life and peace.

Can you already see how these two simple truths about satan, can be seen in the device/scheme of pornography and lust? Can you see that these devices are ancient tools of the enemy to deceive men, frame men, rob them of glory and power, undermine their faith, kill their hopes, steal their fruit and destroy their seed? Those of us who have experienced these trappings can tell you the same story of how easy it was to get wrapped up in the devices or schemes of the devil. We can testify how quickly we forgot whose we are, who we are and our role in our relationships and on the earth.

It reminds me of  when I was working a summer job in a metal cable manufacturing company as a young teen. In his safety briefing, the foreman was showing us one of the cable winding machines, a two-story behemoth that twisted wire to make a new cable. It twisted at a blurring speed. He was telling us to be careful around that machine because, as it happens, one of the people demonstrating the machine some time back, was wearing a tie that got caught in the machine and it ripped him into the machine. The wires moved so fast ripping through him and all they could recognise him by was his wedding ring. Whether fact or scare tactic, it made an impression on me. Needless to say, I never went near that machine without some extreme cautions. It was only later while fighting an addiction to pornography that the imagery became more ‘real’ to me. It was uncanny how in the midst of my struggle the only thing I could recognize myself by was my wedding ring; my symbol of covenant and promise. What started out as mere curiosity turned into a full blown addiction. I couldn’t just look for scantily clad women, my addiction had progressed to where I was embarrassed at what was on my search history. I wasn’t a beastiality guy, was I? I was so far from whom I had been raised to be, and so far from whom I thought I would be. Even my marriage was only a facade of hope and promise, weakly held together by stubbornness, ignorance, obligation and fear.

As any true divisive scheme of the devil, I was ensnared in shame and fear resulting in emotional and spiritual impotence. I had the appearance of a fruitful life, a high paying job, a wife and kids, but I had no joy, no hope and no faith.

Sometimes we forget that the serpent, or Lucifer, or Satan has lost the battle of battles and poses no threat to powerful people. Even if we believe that, we sometimes find it difficult to really take a hold of because we might feel powerless to resist him. That was so true of my experience with pornography. Insecurity, vulnerability and fear of rejection and pain drove, what was merely curiosity, into a full blown addiction. No matter how I tried to ‘quit’ I just seemed to always be driven back to the same-old-same-old. I could quote the scripture ‘resist the devil and he will flee’, but yet I was terrified that my innocent boys would discover pornography because I didn’t believe you could resist the hold it would ultimately gain over you. It wasn’t till my encounter on the couch that I truly believed that God could really really set you free. It wasn’t till I faced my fears and pain in the onslaught of temptation that I realized I could resist the devil and he would flee.

OK, judge for yourselves whether pornography is truly a device of the devil. Look a the market research of the effect and usage of pornography I include here and begin to ask yourself these questions:

Is this God’s best for me?

Graeme Morris writer, speaker, and advocate for wholehearted sexuality. Leader of a band of brothers and a fighter for real freedom.

This site uses Akismet to reduce spam. Learn how your comment data is processed.

Graeme Morris writer, speaker, and advocate for wholehearted sexuality. Leader of a band of brothers and a fighter for real freedom.